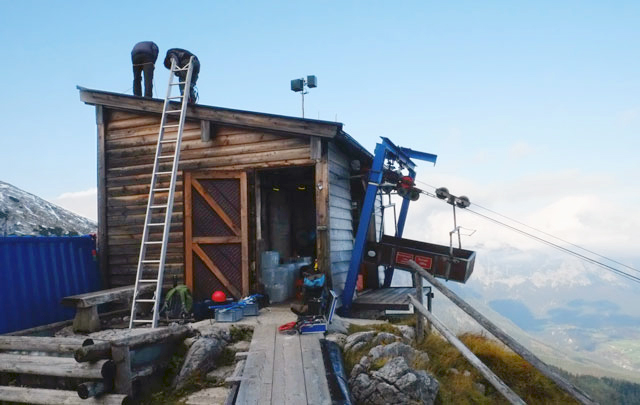 Smart Radio Net GmbH builds and operates high-availability voice and data networks for critical infrastructures or critical operating processes. Radio is transmitted on specially allocated frequencies, independent of the public network. In the project a power supply for the alpine bridgehead at the Watzmann was realized. This can be used to bridge distances of up to 180 km into the interior of the country. As is usual for critical applications, the site has a redundant design: two SIQENS Ecoport 800 fuel cell systems ensure an uninterruptible power supply. Approximately 80 watts are required to operate the radio system including gateways. Three connected tanks with a total volume of 180 litres enable non-intrusive operation for more than 150 days. Enough to get through the snowy days at the Watzmann.

“As a Bavarian company, the further development of this network in Bavaria is particularly close to our hearts. We see our Smart Bayern Net Kritis as a secure communication backbone in harmony and as a complement to the public broadband expansion. A blueprint for the whole of Germany,” says Harald Huber, Head of Business Development at Smart Radio Net GmbH.

Compared to conventional mobile radio stations, the radio system consumes little energy. Including the gateway, approximately 80 watts are required. For comparison: For inner-city mobile radio systems, a connected load of up to 4 kW is required, which is approximately 50 times as much. However, inner-city systems can also simply be connected to the power grid. On the Watzmann, power is supplied by a battery which is charged in summer by a photovoltaic panel.

This is one of the fundamental challenges of the site: how can a power supply be ensured all year round and independently of weather-related fluctuations? The Munich-based technology company Siqens GmbH provides the answer. The battery is also reliably recharged in winter via a methanol fuel cell.

“In the end, we considered various systems and technologies,” explains Harald Huber: “The Siqens system convinced us, among other things, with its robust design and high tolerance to low temperatures.” As is usual for critical applications, the site has a redundant design: two fuel cell systems ensure an uninterrupted power supply. A similar structure has already proved successful in the Tyrol’s disaster control system. There, an alpine radio relay network ensures the transmission of alarm-relevant data and the connection of individual districts.

Fuel cell as a replacement for diesel generators

“Of course, this is always exciting for us, too, when our fuel cells are used under extreme conditions,” explains Volker Harbusch, CEO and founder of Siqens GmbH: “But this is one of the reasons why we have designed and developed our technology for use at low temperatures.”

Strictly speaking, the Siqens Ecoport 800 is a hydrogen fuel cell powered by methanol. However, the hydrogen is first obtained from methanol in the system. This offers the advantage, especially in remote locations, that liquid methanol in canisters is easy to transport and store. “Methanol is the simplest hydrogen carrier there is and can be produced in a variety of ways based on renewable energy,” Harbusch said.

Three connected tanks with a total volume of 180 litres enable non-intrusive operation for more than 150 days. Enough to get through the snowy days at the Watzmann. However, the technology is also a building block for combining decarbonisation and grid hardening for locations with an existing connection to the power grid. This is because it is also necessary to maintain the security-relevant communication and data exchange for several days in the event of a power failure.

Currently, diesel generators are still mostly used to protect critical infrastructures. In the case of the Watzmann, a 25-litre canister of methanol is enough to supply the site with uninterrupted power for over three weeks. “Our goal is to provide an environmentally friendly and economical alternative to diesel generators,” explains Volker Harbusch: “That’s why I’m particularly pleased about the close cooperation with Smart Radio Net and the opportunity to make an important contribution to setting up a fail-safe communications network with our technology.”

R & D in the field of renewable energies

picea – year-round electricity storage for your own home

Stand-alone base station for 5G mobile communications in Trollstigen, Norway

Bamberg: Climate-friendly electricity from the neighbourhood

Fuel cell for public safety and health in Singapore

Mains backup system for a substation of Bayernwerk AG